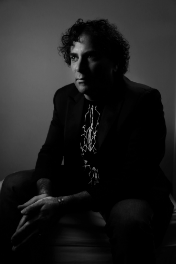 Michael Yezerski is a four time AACTA nominated composer and one of the busiest writers working today. He has a unique voice in film music. With a background in both electronic music production and orchestral writing, his scores are highly evocative, original and diverse.

Recent film projects include Sean Byrne’s explosive horror metal epic, The Devil’s Candy. Michael won Best Original Score at Fantastic Arts 2015 for his relentless, drone metal soundtrack. The film is already a cult hit and sat prominently atop the US iTunes horror charts for several weeks on its digital debut. Bill Guttentag and Michael Ware’s searing documentary feature Only the Dead See the End of War premiered at Telluride followed by a successful season on HBO. The film has just been nominated for an Emmy.

Michael’s first feature film scores were the critically acclaimed The Black Balloon (dir. Elissa Down) and The Waiting City (dir. Claire McCarthy). He wrote both score and songs for these films, collaborating with some of the finest Australian recording artists. Since then, Michael has written the scores for over fourteen feature films and has been nominated four times for the Australia’s highest film honor – the AACTA award for Best Original Score. He has won numerous industry and guild prizes.

Several of the most acclaimed Australian television productions of the last few years feature a score by Michael Yezerski. The period drama, A Place to Call Home (now entering its fifth season), is a cult hit around the world, screening in over one hundred and fifty countries. The acclaimed mini-series Peter Allen: Not the Boy Next Door won multiple AACTA awards and the true crime thriller Catching Milat shocked the country (the highest rated drama series of 2015). The Secret Daughter (starring Jessica Mauboy) and Wanted were the highest rated Australian network dramas of 2016. Both return in 2017. Next, Michael will be scoring season two of Wolf Creek.

Michael studied musical composition under Peter Sculthorpe and Ross Edwards at the University of Sydney graduating with first class honours. Michael then graduated with distinction in audio technology from the Australian Institute of Music and completed Film Music studies at the Australian Film, Television and Radio School. He began playing the clarinet at age 7 before teaching himself to play the piano at age 12 and composing a year later.